PORT CHARLOTTE, Fla. — Texas Rangers closer John Wetteland strained his right ankle during a workout Monday and is expected to miss the next week or two.
Wetteland, who had 42 saves and was 3-1 with a 2.03 ERA, will be sidelined while the swelling goes down.
“It’s frustrating because I put in a lot of sweat and hard work to get back to where I was feeling pretty good,” Wetteland said. “It just shows that the ankle is an important part of the body, too.”
Wetteland had elbow surgery in the off-season and has been throwing without any problems.
Rangers pitchers and catchers reported to camp last week. The full squad is due in on Thursday.

In somewhat of a rarity, a Texas Ranger was covered nationally. Juan Gonzalez is on the cover of the March 1999 Baseball Digest. It’s an article entitled “The Majors’ Overlooked Run Producer”, and runs 4 pages. It speaks very highly of Juan. Unfortunately, BBD does not have full coverage of their magazines on the Internet, but they do have a web site for the magazine at http://www.centurysports.net. You can view information about the current issue of the magazine there (as of right now, they have the February 1999 issue online). Here is a picture of the March cover that I scanned myself. Click on it to see a larger version.

Well, today is the first day of workouts for pitchers and catchers in Spring Training. I picked up these two pictures today off the AP News Wire of Ranger Spring Training. Click on either of them for a larger version. The one on the left is of Johnny Oates & Aaron Sele. 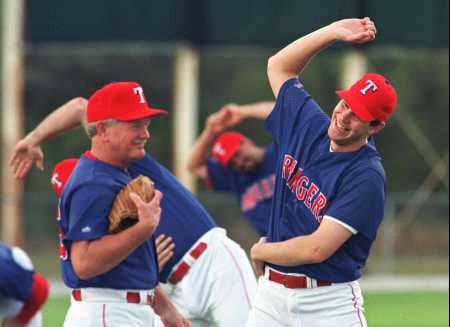 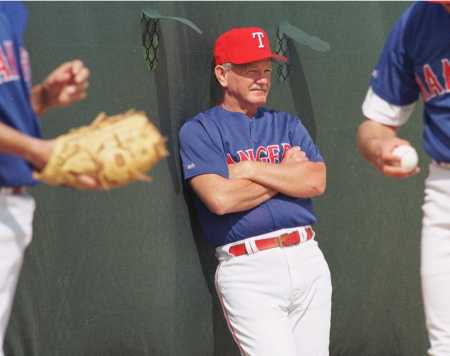 From Joe: Oh great. This is the same thing that’s been bothering McLemore for the last couple of years. Everyone’s saying that Raffy will be fine for opening day. It just strikes me as funny that someone has surgery right before the start of spring training, and they say he’ll be fine. Sounds fishy to me. :( Don’t get me wrong, I do hope he’s fine, but it worries me.
ARLINGTON, Texas — Texas Rangers first baseman Rafael Palmeiro underwent surgery Wednesday to repair a slight cartilage tear in his right knee.
Palmeiro, who signed a $45 million, five-year contract to return to Texas after five years in Baltimore, is believed to have injured himself while running stairs as part of a workout last week.
Doctors said he might be limited a bit at the beginning of spring training, but he should be able to play in exhibition games. He’s expected to be ready for the start of the season.
Team orthopedist John Conway said the tear was in the area of the groove on which the kneecap slides.
As a left-handed hitter, Palmeiro gets his power by stepping into the ball and planting his right leg. He hit .296 with 43 homers and 121 RBI for the Orioles last year.
The Rangers also announced that they signed four rookies on the major league roster to contracts: pitchers Derrick Cook, Ryan Glynn and Jonathan Johnson and infielder Kelly Dransfeldt.
The team now has agreed to terms with 33 of its 40 roster players.

From Joe: This actually makes sense, especially if the Eagles pick him in the draft.
The most closely watched player in the Texas Rangers’ camp will not be the reigning MVP, Juan Gonzalez, or the returning high profile free agent, Rafael Palmeiro. It will be a minor leaguer — guy by the name of Ricky Williams. The Rangers would love to give the Heisman Trophy winner a long look and then send him to Class A Savannah. But to do that they need to work out a deal with Philadelphia, which lost him in the Rule 5 draft.
That deal is proving to be difficult. The Phillies want someone who will play in the big leagues but the Rangers only offered a fringe prospect. To complicate matters, the Phillies have been in contact with the Eagles, who may take Williams with the second pick in the NFL draft. If that’s what the Eagles have in mind, the Phillies want Williams back so he can pursue a two-sport career in the same city — just the same way Deion Sanders once did in Atlanta.
This originally appeared here

From Joe: One Year deal, eh? Probably a hedge against his career stats, which aren’t THAT great. I don’t think Sele deserved 6.25 mil (he made $2.85 in 98). He got 19 wins, but doesn’t seem like that dominating of a pitcher. Discuss this on the forums..
UPDATE: The news services are reporting the contract is for $5,525,000. In addition to his base salary, Sele can earn a pair of $50,000 bonuses: $50,000 for making the American League All-Star team and $50,000 for pitching 115 innings.
sele1.jpg (15501 bytes)ARLINGTON, TEXAS (TICKER) — Righthander Aaron Sele, who had the best year of his career last season, today agreed to terms on a one-year contract with the Texas Rangers, avoiding arbitration.
Financial terms were not disclosed. Coming off a 19-win season, Sele was seeking $6.25 million while the Rangers were offering $4.8 million, with a hearing scheduled for Thursday.
Sele, 28, made $2.85 million in 1998, when he went 19-11 with a 4.23 ERA in 33 starts, helping the Rangers win their second American League West title in three years. He led the staff with 167 strikeouts and added three shutouts and two complete games as he made the All-Star team.
Last season was Sele’s first with the Rangers. He spent parts of his first five seasons with the Boston Red Sox and has a career mark of 57-44 with a 4.37 ERA in 141 starts. He missed nearly all of 1995 with arm trouble and also was on the disabled list in 1996.
Sele was acquired with pitcher Mark Brandenburg and catcher Bill Haselman for outfielder Damon Buford and catcher Jim Leyritz on November 6, 1997.
The Rangers have 29 of their 40 roster players under contract, none of whom are eligible for arbitration.

From Joe: I’ve always said that if the United States ever makes Puerto Rico a state, you can bet your ass that someone will attempt to put a franchise in Puerto Rico. It may even happen if PR doesn’t become a state. Either Puerto Rico, the Dominican Republic, etc… On the flip side, with the general income in these areas not being the same, it’d be interesting to see if the economics that are needed to support a MLB team can exist in other countries.
NEW YORK — Baseball is looking to expand to another international frontier this year: Puerto Rico.
A three-game series between the Chicago White Sox and Texas Rangers in May might be moved to San Juan, according to officials in the commissioner’s office.
No final decision has been made, the officials said, adding there is a 50-50 chance the series will be moved. It currently is scheduled for May 10-12 at Comiskey Park in Chicago.
For the first time, baseball is opening the season outside the United States and Canada. The NL champion San Diego Padres moved their home opener on April 4 to Monterrey, Mexico, where the Padres met the New York Mets two years ago in the first regular-season games ever played outside the United States and Canada.
In addition, baseball is considering a proposal to have the Seattle Mariners open the 2000 season in Japan.
AL Most Valuable Player Juan Gonzalez and Ivan Rodriguez, among the top Puerto Ricans in the major leagues, make the Rangers the focal point for any games in Puerto Rico, the baseball officials said, speaking on the condition they not be identified.
However, Texas had the fourth-highest attendance average in the AL last year, 36,141, making the Rangers reluctant to give up any home games.
Chicago had the third-lowest attendance in the AL, averaging 17,609. As part of any agreement, the White Sox would be compensated for the lost home games, the officials said.
Sandy Alderson, the executive director of baseball operations in the commissioner’s officer, said there was a possibility of playing in Puerto Rico but declined to identify the teams involved. Others, however, confirmed the Rangers-White Sox series was the candidate.
“They haven’t contacted me at all,” White Sox general manager Ron Schueler said. “We haven’t heard anything.”
Rangers general manager Doug Melvin did not return a telephone call seeking comment.