ARLINGTON, TEXAS (TICKER) — The Texas Rangers, searching for a backup to perennial All-Star catcher Ivan Rodriquez, today agreed to terms with free agent John Marzano on a minor league contract for the 1999 season.
The deal was struck with Triple-A Oklahoma of the Pacific Coast League but the 35-year-old Marzano has been invited to spring training camp as a non-roster player. He earned $300,000 last year.
Marzano spent the last three seasons as a reserve with the Seattle Mariners. In 1998, he batted .233 with four homers and 12 RBI in 50 games. He had a .997 fielding percentage — one error in 342 chances — while starting 40 games behind the plate.
In a 10-year career with the Mariners, Rangers (1995) and Boston Red Sox (1987-1992), Marzano owns a .241 average with 11 homers and 72 RBI in 301 games. He was out of the majors for two seasons after undergoing elbow surgery on May 3, 1993.
Marzano spent the 1995 season in the Texas organization, hitting .309 in 120 games at Oklahoma City before going 2-for-6 in two games with the Rangers late in the season.
Bill Haselman served as the backup to Rodriguez last season, hitting .314 with six homers and 17 RBI in 40 games. But he signed with the Detroit Tigers during the offseason.

The Rangers signed 41 year old Tony Fossas to a minor league contract for 1999. The contract also includes an invite to the 1999 Spring training camp. Tony signed as a free agent last year and was used in the September stretch drive almost exclusively against left handed hitters.
(Sports Ticker News Story:) Left-hander Tony Fossas, still effective against left-handed batters at the age of 41, today signed a minor-league contract with the Texas Rangers. The pact with Triple-A Oklahoma of the Pacific Coast League includes an invitation to major-league spring training as a non-roster player.
With a sweeping curveball, Fossas normally works exclusively against left-handed batters. He was 1-0 with a 0.00 ERA in 10 games with the Rangers after stints with Seattle and the Chicago Cubs. Overall, he was 1-3 with a 5.96 ERA.
Fossas became a free agent after rejecting an outright assignment to the minors by the Rangers. He has pitched in 562 games for six teams during a 10-year career.

Left-hander Eric Gunderson and the Texas Rangers agreed Friday to a $450,000, one-year contract with up to $100,000 in performance bonuses for games pitched. Gunderson, 32, made $510,000 in salary and bonuses last year, going 0-3 with a 5.19 ERA in a club-high 68 games, including one start.
Right-handed pitcher Roger Pavlik also told the Rangers on Friday he was rejecting their offer of salary arbitration. Pavlik, 1-1 with a 3.86 ERA in five relief appearances before season-ending injuries, became a free agent after the World Series and can negotiate with Texas through Jan. 8. ARLINGTON, Texas –The Texas Rangers acquired the best tailback in baseball, Heisman Trophy winner Ricky Williams (shown to the left from the Dec 18th Press Conference announcing him as a Ranger).

Texas purchased Williams’ contract from the Expos on Tuesday, a day after Montreal took him from the Philadelphia Phillies with the fourth pick of the major-league draft for players left off 40-man rosters.

Rangers owner Tom Hicks, a University of Texas regent, would love to see the Longhorns star playing in his organization, even though it’s likely Williams’ future is in football.

“I still want to play baseball, but I’ll have to wait and see what happens,” Williams said Monday in New York. “But I’m a football player first. Bo Jackson was definitely a much better baseball player than I am, but I’d still like to give it a shot.” 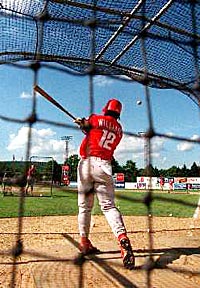 Texas paid Montreal about $100,000, allowing the cash-strapped Expos to more than make up for the $50,000 draft price. Williams, an outfielder, must be on Texas’ 25-man opening day roster or be offered back to Philadelphia for $25,000.

The Phillies picked Williams in the eighth round of the 1995 amateur draft and paid for his tuition at Texas. Technically, he was a walk-on in football.

Williams, a cousin of Cecil Fielder, hit .283 with six stolen bases in 53 at-bats for Class-A Batavia of the New York-Penn League last season before leaving the team to begin preparing for his senior year at Texas.

He ran for 2,124 yards and 27 touchdowns this season, leading the Longhorns to the Cotton Bowl. He won the Heisman Trophy on Saturday.

To make room for Williams on the 40-man roster, the Rangers designated infielder Scott Sheldon for assignment.

NOTE: There is an additional story about the signing here.

The Baltimore Orioles reportedly have filled a vacancy in their bullpen by signing veteran reliever Xavier Hernandez to a two-year, $2.75 million contract.
Citing unidentified agent sources, ESPN Radio 1000 in Chicago is reporting that the Orioles have signed the 33-year-old right-hander but are not expected to announce it until after the winter meetings conclude Tuesday.
However, Orioles spokesman John Maroon said the club has yet to reach a deal.
“I know they are talking, but nothing is imminent,” Maroon said.
The Orioles are in the market for bullpen help after trading Armando Benitez to the New York Mets and losing Alan Mills to Los Angeles via free agency.
Hernandez was 6-6 with a 3.57 ERA and one save in 46 games for the Rangers last season, striking out 41 in 58 innings. The middle reliever also has pitched for Houston, the New York Yankees and Cincinnati in a major-league career that began in 1990. 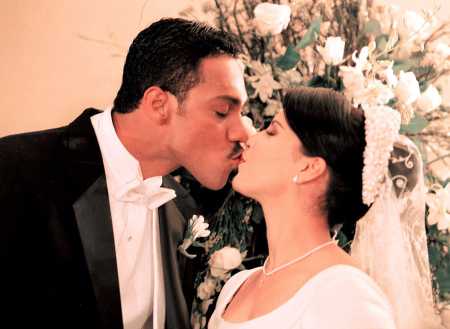