Late last evening after the Rangers game was over, the word came down at the Regency street with the Chicago Cubs for one time first round pick Geovany Soto. He was treated for AA Frisco pitcher Jacob Brigham. Brigham is not a name it’s going to light the world on fire, I’m not entirely sure why the Cubs would want him. It’s probably more a case of wanting to get rid of Soto and had to get something back for him so they took this guy.

END_OF_DOCUMENT_TOKEN_TO_BE_REPLACED

Ron Washington named his starting rotation for the beginning of the 2012 season on Thursday.  It pretty much isn’t a big surprise, although there was one minor surprise to me.   Here’s the five:

END_OF_DOCUMENT_TOKEN_TO_BE_REPLACED

Right as I sliced my hand on Wednesday, the word came down that Derek Holland and hte Rangers had agreed to a long term extension.  Earlier this off season we had agreed to a one year deal, avoiding arbitration.  That deal was worth $504,700.  It’s been voided/replaced/whatever by this new deal which goes into effect immediately.  This seems like a great deal for both sides here.

END_OF_DOCUMENT_TOKEN_TO_BE_REPLACED

Saw on Twitter tonight from Evan Grant that the Rangers and Derek Holland are close to a new contract.   Apparently, it will be a five year deal, and it will supersede the contract he signed earlier this off season for 2012.  Will take him through 2016, which would be one year of free agency, as Holland is currently eligible to be a free agent after the 2015 season.

This is a good deal, assuming of course Derek holds up his end of the bargain.  He does seem to have figured it out, and while we don’t have any numbers on this deal yet, I do like the fact that we appear to be signing SOMEONE long term.  There’s going to be too many variables in too short a time for my liking.  The team will probably radically change about two years down the road, but Derek Holland apparently will still be here.

Making us all FEAR THE STACHE! 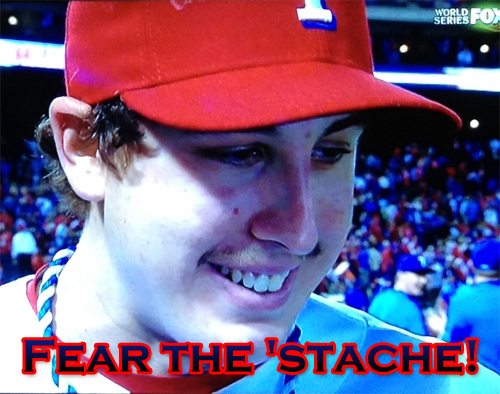 A lot has been made about the center field position this year.   It’s historically been an unstable one for the team, there’s not been many players in the last 20 years that have grabbed a hold of it, and kept it.  Oh, good people have played there, but never one guy who was “THE MAN” out there.

The Rangers don’t want Josh Hamilton out there, they want him in left.  Julio Borbon looked like he had a lead on it at the start of last season, but got hurt, and that fell apart.  He’ll have a chance again this year, but he’s probably on his last chance here.  There’s really no dominant guy out there at the moment – there’s a bunch of names that can be used out there.  Craig Gentry, Leonys Martin, Josh Hamilton, and David Murphy just to name a few.

But I wonder if this is the last hurrah for Julio Borbon.  There was some noise about trading him to the Nationals not too long ago, I guess that isn’t happening.

Nolan Ryan spoke on this yesterday during spring training, here’s some video of him talking.


Usually towards the end of the year, we always hear about how many players the Texas Rangers have used overall in any particular season. The Rangers are usually towards the high end of that list. Injuries, callups, usually make for a long list, and you tend to forget the guys who are here so quick that they don’t even have time for the proverbial “cup of coffee”.

Anyway, this post will get bumped whenever there is a player who is making his first appearance for the Texas Rangers in 2011 (not guys like Teagarden & Davis that get called up 20 times a season). I am going to count guys who get called up, but don’t play immediately (or sometimes don’t play at all), as they will be part of the 25 man roster officially. So here goes. The most recent additions will be on the top of the list. The original opening day 25 man roster is not in any particular order.
In 2011, the Rangers have just one in the original opening day 25 that is making his major league debut (Mason Tobin), which is an increase over 2010 when we had nobody. We had one in 2009 (Elvis Andrus) and one in 2008 (Kaz Fukumori). We do have, however five guys making their Ranger debuts in 2011: Adrian Beltre, Dave Bush, Mike Napoli, Arthur Rhodes, Mason Tobin, and Yorvit Torrealba.

Please note that 1 to 25 are in no particular order.

Was sent this pretty good link on Koji Uehara the other day. I still want to say something about the trades, but I wanted to get this link out there. Go read it, you’ll probably like it. :)
Thanks to Bill Chuck for sending me that.

I just got sent this press release by Fox Sports Southwest. Cool to read. Definitely cool!

The Texas Rangers’ season-opening three-game sweep over the Boston Red Sox was a television ratings hit on FOX Sports Southwest. The regional cable sports network recorded its best-ever rating for an Opening Day telecast and had it topped two days later, according to Nielsen Media Research.
The Rangers’ 9-5 victory opening the 2011 season on Friday, April 1 averaged a 5.5 Nielsen household rating in Dallas-Fort Worth, a 161% increase over last year’s 2.1 Opening Day rating against the Toronto Blue Jays. It surpassed FOX Sports Southwest’s previous high for a first-game Rangers telecast of 3.9 set on April 6, 1999 against the Detroit Tigers and was the best Opening Day rating for a Rangers broadcast in 12 years since KXAS-TV recorded a 6.5 on April 5, 1999 versus Detroit.
The Opening Day rating was bested on Sunday, April 3 with a 5.7 household average. Saturday’s (April 2) game on FOX Sports Southwest averaged a 4.4 household rating.
An average of 141,700 households in Dallas-Fort Worth tuned in on Friday to watch the Rangers begin their defense of the American League championship, while an average of 115,200 homes watched Saturday’s game, and 147,900 homes tuned in to watch the Rangers complete the sweep on Sunday.

This morning when I got up, the first news story I saw was about Chuck Greenberg and the Rangers. I read a bit about that, and then was planning to write about it.
Then I read about the Earthquake & tsunami in Japan, and to be honest, I don’t feel like writing about Chuck Greenberg at the moment. I will, but there’s more important things to think about at the moment than Chuck Greenberg’s departure from the Rangers.
In the meantime, I suggest checking out what Joey M had to say over at Baseball Time in Arlington about it. I’ll have my own opinions later in the day. There’s also this story with a few reactions from Rangers players.
I’ll just say this for now. Last year we had the drama in spring training with Ron Washington and cocaine. This year it’s the Chuck Greenberg thing. Distraction yes. But if what I’m reading about “overstepping bounds” is accurate, then I can understand it.
More later once I have a chance to mentally digest it.