Here’s one that really irritates me. Will the fans at the Ballpark please learn your ballpark? I really hate when anyone hits a ball into the outfield, everyone goes oooh and aaah, like it’s a home run, when it’s nothing more than a popup to shallow centerfield or something. It really bugs me that people don’t know the difference between a home run hit ball, or a popout. :( Grrrr…

Someone please tell me why the Rangers have a 30th anniversary logo this year when this is their THIRTY FIRST season in Texas? Do the math. 1972 was their first year in Texas, which means the 2002 season their 31st.

It’s been awhile since I wrote here. As I was at the ballgame last night, I really really REALLY missed Chuck Morgan. The new guy is still botching many player names, has called the player at bat out of order on several occasions, and the new music selections really SUCK! Most of the music played is bad cover songs of songs that I’d wager most no one wants to hear. It made it worse hearing all the “stuff” Chuck Morgan used to do in Kansas City. Not to mention the fact that the few times the ballpark entertainment staff tries to get the crowd into a game they either come in too late, or don’t even bother – like last night starting the bottom of the ninth. Nothing. Also, as another side note – the sound is really BAD anymore in the ballpark. Used to be loud and clear, but video effects either have no sound at all, or if they do have sound, it sounds like you’re hearing it as you would standing outside the ballpark. Or worse, it sometimes changes volume in the middle of the sound effect. The ballpark entertainment crew of three that replaced Chuck Morgan definitely gets a D-.

I’m back from my trip to Pittsburgh. The vacation was nice, and PNC Park was beautiful! Iv’e also decided that since there’s 10 games I’d need to update for my time away, I’m not going to bother – I’ll leave those blank, which will be a nice break for me. :) I’ll get back to normal with Tuesday’s game against the White Sox.
I’ll be putting up pics of PNC Park in a couple of days, I have a horrendous amount of work to deal with as I’ve been offline for a week now. :)

I am not going to be update until the Rangers hit the road again after the 13th as I’m going out of town on vacation. I’m gonna see the new PNC Park in Pittsburgh. See ya in a week!

I have some news to the idiots who run the pre-game show at KDFI.. When there is something important like the farewell ceremony with Cal Ripken, you don’t talk over it with lame brain announcers.. That guy they have who stands in the camera pit while talking… Yeesh, we could do without this guy (what do you mean “If” Cal gets voted in in the first year for HOF eligibility?). And, the roving reporter in the stands – he needs to go too. This guy has no personality. Bring back John Rhadigan. As for the Cal thing – you need to dump your mostly lame pre-game banter, and show the FULL Cal ceremony. If these guys were covering the team when Nolan Ryan’s number was retired, they’d probably jabber over that too with some inane junk that we all knew already.

The Dallas Morning News has had something on their Rangers page ever since the Rangers started tanking good this season. “NUmber of days left until end of Rangers season”. That really pisses me off. It’s so much the Dallas Cowboy fan mentality (which I hate too) – guys, there’s a lot to play for this season. A countdown to the end of the season is NOT necessary. The folks who put that on the DMN site should be banned from covering baseball anymore, and forced to cover the Cryboys.

Did anyone get an extra copy of the Rangers comic book that was given out at Wed night’s game? If so, please drop me an email – I’d like to hear from you. 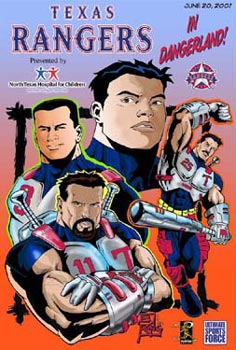