In going over my roster pages for the 2010 season, here are some former Rangers whose current whereabouts I can’t find accurate (or at least formal) info for. If you know any, please comment below. If you think they’ve retired, let me have a link, not just “I think they retired”. Danke.

UPDATE #1: Thanks to a friend of mine Dave who is a big Red Sox fan, he found a story showing that Kason Gabbard resigned with the Sox for 2010. It also found that Doug Mirabelli is formally retired now and works as a realtor for Coldwell Banker Schmidt Realtors in Traverse City, MI.

The best shot I thought Blalock had for a starting 1B gig anywhere was with the Mets. They’ve now signed Fernando Tatis again to platoon with someone else to play first for the Mets.
Wow, they weren’t even interested in Blalock? What’s he doing, asking for $13 million a season or something? I’m really surprised nobody is even talking about him. The only time you hear Blalock’s name mentioned nationally is when someone goes “Man, why is Blalock not being picked up?”
I had heard a rumor about a month ago or so about him maybe going to the Pirates. A quick check online as I write this shows that Baltimore might take a sniff on him, but even that seems odd.
He didn’t fall off THAT much at the back end of his time here. So why seemingly no nibbles at all?
Hank’s Homies can’t be happy about any of this.

If you remember a video I posted last July of Orel participating in a video called “Voices that Care“, it was pretty painful to watch. However, I was just emailed one that’s even worse. Like the other Orel video, this makes the Super Bowl Shuffle look like Grammy Award winning stuff.
Man, there was some awful crap in the 80’s. Given Andruw Jones has filed for free agency, and the Rangers have said he’s not coming back, I can officially categorize this news story as “Former Rangers News”. Anyway, I decided to check into his money situation, given he had a quite strange salary situation in 2009. As you might recall..

His total base salary in 2009 was $15 million dollars. $500,000 of that was paid by the Rangers, so he made out like quite the bandit from the McCourt’s out in LA. That’s just the base. Here’s a summary of his incentives with the Rangers in 2009.

To sum up, he reached NONE of his incentives, which would have brought his Rangers salary to $1.975 Million. The total outpay from the Rangers was just $500,000, though. That’s not a salary problem there.

The fun part of this is that he still is owed money from the Dodgers from what I can tell. $5 million of his original signing bonus is due in 2010. Bet they’ll still love paying for that.

Saw on ESPN tonight that the Cubs are going to announce in the morning that they’ve hired Rudy Jaramillo to be their hitting coach.
Story here. Bet you a lot is made about how Rudy is the way out of the Milton Bradley situation.

… or at least he did. ;)
I ran across this video a few months ago, and never put it online. As I’m trying to clear up a lot of “deal with these later” bookmarks in my browser, here goes.. In 1991, a charity song called “Voices that Care” was written “to help boost the morale of U.S. troops involved in Operation Desert Storm, as well as supporting the International Red Cross organization.”
It had a gaggle of musicians, and entertainers, not all of which seemed to go together. Randy Travis, Celine Dion, Garth Brooks, Little Richard, The Pointer Sisters, Kenny G, and Jani Lane from Warrant. There’s also others in the “choir” equally as disconnected. Sheena Easton, Sally Field, Don King, Jon Lovitz, Fred Savage, Alyssa Milano, Chevy Chase, and yeah – former Rangers pitching coach Orel Hershiser.
In an article I read about this thing, Orel had this to say regarding the video:

“It’s like someone picking your nose — you don’t want to watch it,” Hershiser said. “I see the first frame and I turn away. That might be the most embarrassing thing ever. It’s right up there with ‘The Super Bowl Shuffle.'”

He’s right, it’s pretty atrocious. I know it had good intent, but yeesh – do thes people think sap songs like that will LIVEN people’s spirits? They’re likely go go “Eargh – TURN IT OFF!” Here, look for yourself (Orel appears at 4:10)…

Read tonight where Sammy Sosa has announced he plans on formally retiring. The article doesn’t say when exactly, but you have to assume it’ll be shortly.
He seems to not want to talk about steroids at all based on the quotes he gave. One of the more interesting quotes is this one:

“I will calmly wait for my induction to the Baseball Hall of Fame. Don’t I have the numbers to be inducted?,”

Makes you wonder – is Sosa a hall of famer? He certainly did a lot in 1998 with Mark McGwuire to help the sport. Whether it’s valid or not is another discussion – which I’m sure we’ll hear a lot about once he formally becomes a candidate.
What do you think? Should Sosa be in the Hall of Fame?

My brother back in Philly just emailed me and told me that the Phillies officially named Chan Ho Park their fifth starter. Uh-oh. There goes their chance of repeating, which you know as a Phillies fan I really want to do. Screw the Mets. My brother actually told me this.. “He actually pitched very well in ST. Pitched the best out of all of the starters.”

However, as a Rangers fan, I expect to see a lot of this from Charlie Manuel. Former Ranger pitcher Rick Helling apparently now has a job in the MLBPA union with the always vague title of “Special Assistant to the Executive Director”. I saw this in a story over on bizofbaseball.com..

Major League Baseball Players Association Executive Director, Donald M. Fehr, today announced that former Major League pitchers Rick Helling and Mike Myers are joining the Association’s staff. Helling and Myers join former Major Leaguers Bobby Bonilla, Phil Bradley, Stan Javier and Steve Rogers as special assistants to the Executive Director.
“Mike Myers and Rick Helling had long and successful Major League careers, during which they served on the Association’s Executive Board and represented the players as members of the negotiating committee in bargaining for our Basic Agreement and Pension agreements,” said Fehr. “They are very familiar with the interests and needs of the players, and understand intimately the job that the MLBPA does for its members.”
During his 13-year Major League career, Helling served as a member of the Executive Board from 1999-2007, and was the American League Representative in 2000 and Alternate Association Representative in 2003. He appeared in 301 games as a pitcher for Texas, Florida, Arizona, Baltimore and Milwaukee, with a record of 93-81 and 1058 strikeouts in 1526.1 innings pitched. Born in Devils Lake, North Dakota, Helling graduated in 1993 from Stanford University with a degree in economics.

No surprise here. As was pointed out, he has done a lot of union work before, being the player rep for the Rangers if I remember right. Just remember Rick, one is for sugar and two is for ketchup. :) 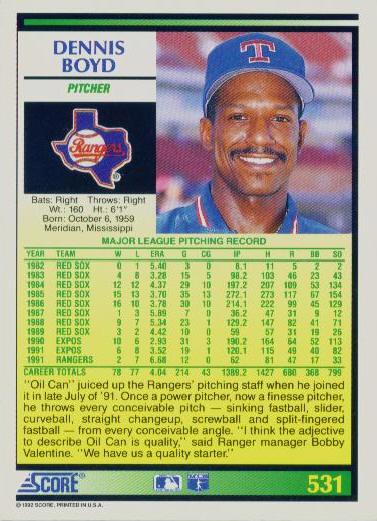 Will this really be Oil Can Boyd’s final baseball card? One would have to think so. Even if he isn’t and manages to come back, I think Satchel Paige’s oldest pitcher record will probably remain unbroken. :)