You are here: Home / Archives for 2004 Game Recaps

The last game of the season ended on both a bright note and a scary note. Unfortunately, they’re the same thing. Chan Ho Park pitched the way he should have been pitching. Which means we’ll probably try and go with him again next season. Damn. On the other hand, he pitched really well again in a park that he always pitches well in – Seattle. I wonder if something could be worked out where we send Park to Seattle for something. Park does well there, Seattle has to know that. Park went 7 innings, gave up no runs on 2 hits (3 BB/3K). A stellar performance (unfortunately).
Francisco Cordero got his final save of the season, his 49th. A record breaking season for him, as no Ranger reliever has ever had that many saves. He looked good, and fans seemed to like it when he came in. I think we have this position solved for awhile. :)
We didn’t have a lot of offense ourselves, but we had enough to get three runs across. Texas 2-4, but didn’t score, or get an RBI. Nix had a HR, and Huckaby had a double. Mike Young drove in the other two that Nix did not. As I said, not a lot of offense, but enough.
And the season comes to a close. By every account, this was a huge success, we didn’t drop out of the race until after Game #158 of the season – a major accomplishment. Buck Showalter should be manager of the year.
I also sincerely hope that Rudy Jaramillo comes back next year. He’s a great portion of our success, and I would hate to have him leave. As I’ve said before, if he left to get a manger’s job, I can’t fault him for leaving for that. However, if he leaves and becomes a hitting coach somewhere else, then I’ll be pissed. If he takes a lateral move, it means the Rangers didn’t do enough to keep him.

Kenny Rogers had a career season, winning 18 games. His previous was 17 wins, but he topped it by one this year, and in my opinion should have been a 20 game winner, but he had a few leads blown for him. :(
Mike Young went 3-5 with a home run and 4 RBI’s to lead the Ranger hitting attack. We also had a home run from Mench, and a 3-5 game from Teixeira and Mench. Hell, Manny Alexander went 2-3 with an RBI and 2 runs scored. We had a total of 16 hits with five doubles. A nice offensive display.
For a meaningless series, the games certainly seemed to be lively. Last night was Ichiro. Tonight was Edgar Martinez, who had a ceremony for his career tonight. He also took one pitch over at third base, his position for a long time before becoming a permanent DH.
161 down. One to go.

Ryan Drese has run out of gas, he’s gotten bombed the last few starts he made of the season. However, I don’t think his season can be called anything less than a total success. He had a spectacular season.
However, this game wasn’t about the Rangers really. We were witness to Ichiro Suzuki’s record breaking 258th hit of the season, breaking an 80 year old or so record by Mr. George Sisler for hits in a season. Not a record to be taken lightly (although some wankers in the press are). Was really great to have seen that.

The final home game of the season ends on a good note, with a 6-3 win over the Angels. Rookie starter Chris Young pitched well, going six innings, giving up three runs, and looking like a good candidate for next season’s rotation. The home season ended the way it started, with RA Dickey on the mound pitching well. Too bad RA didn’t pitch all that well inbetween the start and end of the home schedule most of the time. :(
Of the 81 games at home this season, we won 51 of them, tying our best season for home winning record at 51-30. Overall, an outstanding season at home. Now if we can just get rid of the Gold Club behind home plate, things might go better.
Vlad Guerrero continued to be on a torrid streak here, having another two home runs today (he went 4-4 in this game). That gave him a 12 for 17 streak during this series, with a total of FIVE home runs in this series (two 2 HR games). Amazing.
However, the best part of the game by far was the “Thank you” lap the Rangers made around the stadium at the conclusion of the game. A very nice touch by the team, and probably won them a few season ticket holders for next year by doing that. I’m sure a lot of fans (and Randy Galloway) might see it as a cynical move, but I very much liked it – to me it showed there was some heart there. And that’s always a good thing. 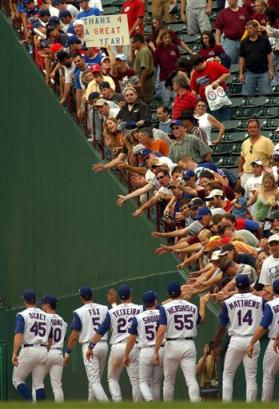 The party is over, as we were formally eliminated from the playoff race with this loss.
The only other thing I’ll write about the game is that it was nice that Mike Young set a new Ranger record for hits, getting his 211th in the bottom of the ninth. He’s also the only Ranger ever to have more than one 200 hit season.

I suppose the thing that bothered me most about this game is that we have the season on the line. We’re up against the wall, and we’re sending Chan Ho Park out there. The biggest pitching disappointment in the entire history of the franchise, and we send him out there to save our slim playoff hopes. If there’s anything that will dash the goodwill of Ranger fans, it’s got to be that. I really hope the Park experiment is cut loose in the off season. It will cost Hicks a gob of money to do that, but he is NOT helping us, and as we move forward from this season, I can’t see Park playing a part in it (a good one anyway), so after three years, it’s time to cut him loose.
We lost this game mostly because of the four home runs given up by our pitching. Two by Park, and two by John Wasdin. Two of them were by Vladimir Guerrero, who definitely seems to have a power stroke here in this series.
After this loss, I said to my wife, “Well, we’re not technically out of it, but we might as well be”. There doesn’t seem to be a whole lot of fire in there right now.

This was bad. Bad bad bad. At least it didn’t do any overall damage, we’re still only two out of first with 7 to go. Still workable.

I was at this game, it was my final season ticket game of the season, was nice to see all my usual friends around me who had tickets too, so if any of you read this – hi! Was a great season. Hope to see some of you in October. :)
Chris Young started off great, was pretty dominant through the first three, except for a solo HR in the first. Wasn’t as much of a see-saw in terms of the score, but it sort of felt like it sitting there. When Young faltered, RA Dickey came in and save for one walk, was perfect in his 3.2 innings of work. Spectacular. We needed it too, with our pen mostly drained.
Offensively, we had just enough. Not a ton, but some power from Soriano, and a few almost home runs and a triple from Mike Young were all we needed to get this win which brings us back to two out.

A back and forth game. There were a ton of pitchers on both sides. Seattle used 6. Texas used 6. I thought Showalter had a bit of a quick hook with Benoit – I thought he could have at least finished 5.
I’m not writing much because I fell asleep (twice) on the sofa watching this game. Even with TiVo, I could have backed it up, but I was so groggy, I just gave up and went to bed.
Shame we couldn’t pick up the win, as it drops us to 3 back now.