On April 14th, I altered my site header to have Jeremiah 29:11 in the header. Why is that there? Well, first off, it’s a bible passage. From the NIV translation, it says:

For I know the plans I have for you,” declares the LORD, “plans to prosper you and not to harm you, plans to give you hope and a future. If you’ve been following my site for awhile, you’ll know something about me, one of which is my love for Jesus Christ. Something else I’ve talked about before on this site is Johnny Oates. I’ve always liked Johnny Oates. As you probably know, I grew up in Philadelphia. Back in the mid 70’s Johnny was a Phillie for awhile. He was the backup to Bob Boone mostly, but there was one year where he was the #1 catcher (1975, if I remember right). While I don’t truly remember the first baseball game I went to, I do recall Oates being a Phillie at games I went to, so it stuck with me. Also, the baseball card image to me was one I always liked when I was a kid. The reason for that is back then you didn’t see spring training at all. It’s not like today – unless you traveled there, seeing video from spring training didn’t happen. Or didn’t for this kid. So I liked this card. It showed Johnny at the Clearwater facility the Phillies were at then. On top of that I always liked this card design as the years went by. So I latched onto this card as one of my favorites as I was a kid.

Fast forward to my moving to Texas. I was here for just two years when the Rangers announced that Oates was going to be the new manager here, and that got me into the Rangers. I had seem some games at Arlington Stadium in its final season. But I didn’t really get into the Rangers until 1995 when Oates (and another former Phillies pitcher, Kevin Gross) were on the team. As his tenure went on, we had great success, and I found out more about him as I was now an adult. Found out about his strong sense of God. He believed, and wasn’t afraid to say it. Makes me wonder what it would have been like had Josh Hamilton been a Ranger when Oates was still a manager. I would have loved to have heard some of those conversations. Even through his illness and death, he was extremely upbeat about God and Jesus. He never (to me) seemed mad at his situation, blamed God – he continued to praise him, which was awesome! I loved that more than the baseball stuff he was known for.

Anyway, over time I collected Johnny Oates baseball cards. A handful of them I had him sign personally (including the card image above). One of the ones I have of his was one of his final player cards, the Fleer 1981 card when he was with the Yankees. On this card, he signed Johnny Oates Jer 29:11. That’s the source of the quote above. Given how much Oates meant to me baseball wise, and his strong connection to the Rangers site, I decided to stick Jeremiah 29:11 in my site’s header and tell this story. I miss Johnny, his strength was a great inspiration to me, and when I was going through my recovery from my leg surgery, I thought about him and his strength when I was having problems with pain and moving around. It helped a lot. So God bless Johnny Oates, and his family for sharing him with us in the baseball world.

Furthermore, a few months ago I decided internally to talk more about God & Jesus on this site. I’m not going to go over the top with it, but if the discussion lends itself, I will use that. One of the things I’ve suffered from for awhile is “Spiritual Schizophrenia”. That’s where you believe in God, and then you “turn it off” in other parts of your life. That you are only doing “that church stuff” when you’re in church, and the rest of your life doesn’t have it. I’ve made a few comments along this line lately on my site, and I have to say – the feedback I’ve gotten since I started doing that was encouraging. I wasn’t sure if people wanted to hear that, and then God moved some people to let me know that perhaps yeah – it is the right thing to do. I’m not turning this into a religious blog. It’s still a Rangers site, and it will be baseball, but I won’t be afraid to witness if the situation dictates it. I am me still, I’ll probably still say things of a strong nature when my emotions carry me there.

A friend of mine who I told I was doing this said “You need to be careful if you do that kind of stuff”. My thoughts lept to Luke 6:22 when he said that. He didn’t mean anything bad by it, but I thought “You know, if people don’t like me and my site because I’m not afraid to talk about the Bible and God’s word, well, then there’s worse things to be disliked for.” For those of you who believe, may God bless you for believing. If you don’t, and would like to talk about it, drop me an email, I’d love to talk to you about it. Maybe someday we’ll get to tell Johnny about out ourselves. I want to close this out with one of my favorite passages:

I pray that you may be active in sharing your faith, so that you will have a full understanding of every good thing we have in Christ. (Philemon 1:6) 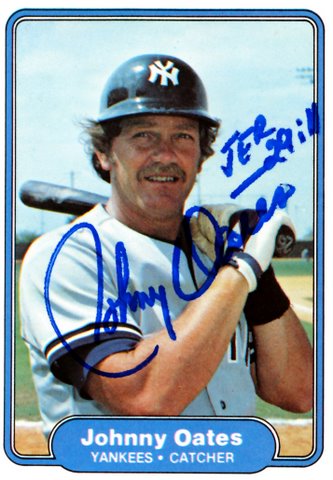