I don’t know why, but the path to a win now seems worse than the terrain of the Hartz Mountains of Asia. There was a momentary feeling that we were over our blip of bad play there, but we definitely seem mired in the mud, that’s for sure. Our starting pitching is generally doing well, there doesn’t seem to be any one glaring thing that if it was fixed, you could say “Hey, we’d be 14-7 instead of 7-14”. Just don’t seem to be able to get out of our own way.
Milton Bradley has been a nice surprise, as has the starting pitching ERA. Josh Hamilton was tied for the league lead in RBI’s after this game, so it’s not like we’re total shite. I’m reminded of a graphic I’ve used before here. Seems appropriate again. 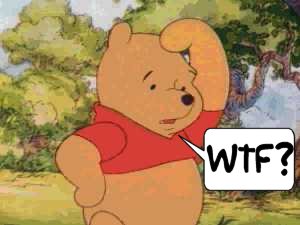 As for the specific game, there isn’t much fun to say about it. Frank Catalanotto’s early home run was a nice feeling, but that was pretty much wiped out by the three home runs Detroit got in the third. I saw that before I started skipping forward on my TiVo. Anyone else expecting Padilla to plunk someone in the back? I certainly was.
I don’t think we’re quite at the point where I’m ready to panic, but I am now skipping more of the games on my TiVo than I’m actually watching.
P.S. Josh Lewin should probably understand the references at the top of this post.