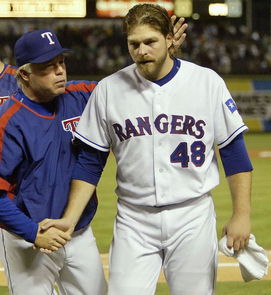 Eight & 1/3 innings pitched
Four hits allowed
Zero runs allowed
One walk allowed
One extremely huge standing ovations
First major league win
Twenty Seventh Birthday
I don’t know how my meager words could do justice to what John Rhinecker did on the mound Monday night. What a birthday present from him, and the shaving cream pie he got in the face from Kevin Mench in the post game show was a great moment. All I hope is that this performance doesn’t get him sent back to AAA. I think he should definitely be allowed at least one more start. I mean.. Wow.
Jarrod Washburn had a great game himself, going 7 innings, giving up just six hits and two earned runs. The runs were on his only real mistake, a home run by Mark Teixeira in the sixth inning, which barely cleared the left field scoreboard wall. But it was enough.
Freddie Bynum is hitting .222 with 2 HR & 6 RBI and 3 SB. Juan Dominguez is 4-5 with a 6.22 ERA in 10 games over 46.1 IP. I think all Ranger fans should send a thank you card to Billy Beane out in Oakland for this one. Does anyone miss Juan Dominguez at the moment? When does John Koronka pitch again?
Oh, and Jamey, I’m not forgetting the PTBNL. I want to steal someone else. We have two steals in this three team trade, let’s go for the trifecta. Let’s get greedy. ;)
Oh yeah, we won 2-0. :)