WOW! What a finish! An absolutely amazing win in a great game means we now are only 2 games out of first place with 10 games to go in the season.
I spent most of the morning at the law firm that represents my company, so when I returned, I didn’t have much time to pay attention to the game. I was buys doing work work and didn’t pay much attention. I know the game changed hands a few times, and when Park gave up a HR ball three pitches into the game I wasn’t filled with a lot of excitement about our chances for a sweep.
I didn’t really get to start paying attention to the game until the 8th inning. We were down 3-2, and then we went down 4-2 when Jeff Nelson gave up a home run ball – the third we gave up today. Then after a 10 or 11 pitch at bat, Blalock jacked a solo home run to bring us back to one run. Following that, Mike Young (who went 4-5 and is now 6 hits shy of setting a new record for hits with a season – he currently has 205) doubled down the line to bring the tying run to the plate. Ken Macha walked Mark Teixeira intentionally (which was his second free pass of the game, his 5th in the game, and a new Ranger record for walks in a 9 inning game). That brought up Brian Jordan who grounded out, in what sounded like a DP ball on the radio. So now we’ve got runners at the corners with two outs. Down a run.
Up steps David Dellucci who has been in an 0-20 slump or something like that. Dellucci gets down with two strikes. We’re down to our last strike, and he then jacks a double (I don’t remember where it went exactly), which scored both Mike Young and Brian Jordan to win the game in walkoff fashion.
My words here simply cannot do justice how cool this win was. I wish I was there, and I might have been had I not had to spend all morning at a lawyer’s office. We’re done with Oakland for the season. Next up is Seattle. Bring it on! 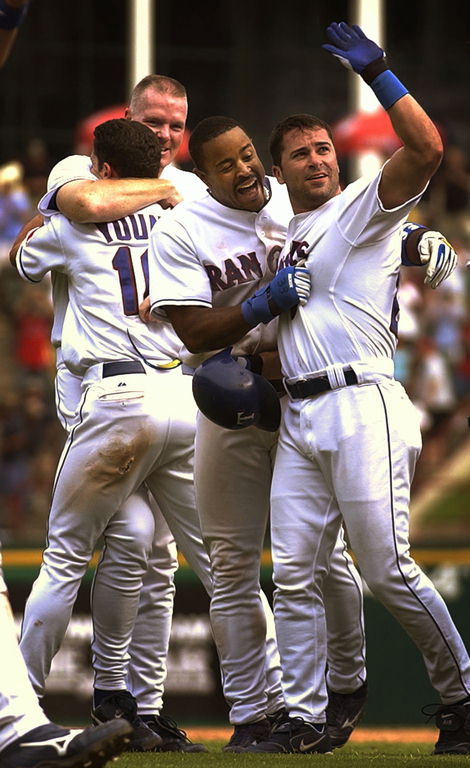