Ryan Drese had his worst outing of the year. Won’t help my fantasy teams that have him, but he did get a no decision. He was gone after 4 innings, giving up 5 runs (4ER) on six hits and four walks. Ron Mahay and Frankie Francisco were good in relief – Mahay looking extremely strong. Cordero was a bit shaky in the 9th, but got the save anyway. That’s it for the pitching. Mahay was the highlight for me. Nothing spectacular to write about pitching wise.
This was a pretty balanced attack offensively. We scored in six of the nine frames (1,2,3,6,7,8), putting up just one in five of those. The big one was the 7th where we had two two run homers from Mark Texieira, who is just annihilating the ball lately, and Garry Matthews Jr, who might be making a case to stay here for good.
However, the best moment for me was the girl who “sang” the national anthem. Having a relative with a disability makes me a little more sensitive to these kinds of issues, and what she did wasn’t terribly unique, as Stephen Hawking amongst others has been doing it for awhile – but it was the WAY she did it that was cool. Sara Pyzka (picture below) was in a wheelchair, and has cerebal palsy – she can’t speak. Technically her voice box machine (I don’t know the real name for it) did the singing, but she controlled it by movements of her head, and it sounded like it had more of a personality than some of the voice boxes I’ve heard in the past (Stephen Hawking for example). Not to mention during it, you could see that she was extremely happy, and was smiling as much as her body would let her. I really enjoyed that national anthem; it was quite moving for me. 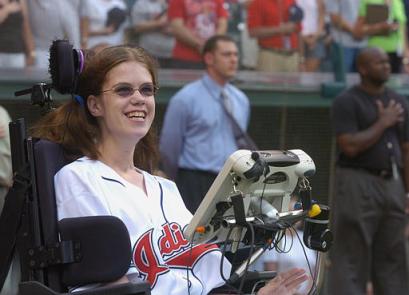