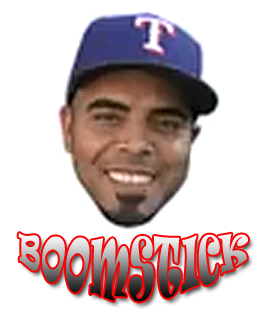 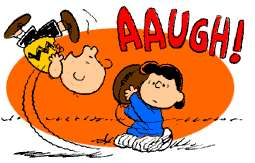 And that’s where I ran into trouble. As I pointed out earlier, I was out when this game was going on live, or at least the start of it. When I TiVo baseball games for viewing later, I usually add an hour to the designated time. Most MLB games are slotted for three hours, and I make ’em four. Given the 15 minutes of crap that Fox puts in front of the game, I made the extra time an hour and a half. And when did that give out? That’s right, just before the last pitch of the top of the 11th. Felt kind of like this Charlie Brown picture here. It was seriously frustrating. Problem is I couldn’t cheat and go to the live Channel 4 feed and pick up what happened after I stopped recording, as too much time had passed. TiVo has about half an hour of live TV buffer, so when my recording stopped, the live buffer took over. But when I hit the end of my recording, it was about 50 minutes after LIVE end of the game, so that buffer was lost. Auuuuuugh indeed! I was scoring the game on my iPad, so I switched over to the MLB At Bat app, and saw we had plated four in the bottom of the 11th. There’s only one scenario where you can get a 4 in the bottom of an extra inning when the game is tied. It meant a walkoff grand slam. Even before I went and looked at the highlights or read the recaps, I went and blew off steam to my wife talking about. All I needed was about 10 more minutes. Oh sure, I saw it on local news recaps, on the MLB At Bat highlights video, but that wasn’t the same. I was robbed. Thanks Fox for not starting the “right” game time! Bah! :)
Enough of rant. Get to the bottom of the 11th, and Michael Young and Adrian Beltre both single. I’d normally write about the tension at this time, but given I knew what happened before I saw how it got there, there was none. Napoli singled to load ’em up again. Surely we couldn’t blow a win with bases loaded, nobody out twice, eh? OK, I’m faking it. No tension again.
Nelson Cruz came up, and on a 1-2 count…. 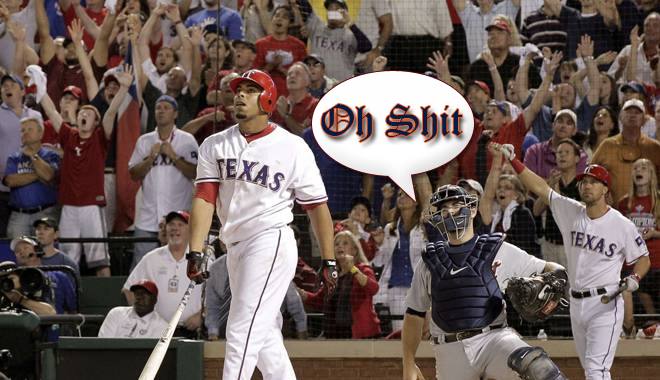 Nelson Cruz made history.. He hit a no doubter grand slam to win the game. While that was super important, and sends us to Detroit on a big high.. It was also the first time anyone had hit a walk off grand slam in extra innings in a playoff game. Ever. Never happened before. Let’s see Andrew Bailey top that one. Click the Nelson Cruz drawing below if you don’t know what I’m talking about. :)