Sigh. It’s a bit early in the season to be disenfranchised, and I really am not, but the road losses are getting rather annoying. We’re something 2-150 on the road this season so far. This franchise seems rather lethargic.
Everyone raise their hand when they thought that Sammy Sosa would be our most consistent offensive performer (in a power department) come April 25th. Sosa was the only real good thing to write about for Thursday’s game. He got his historic 44th different ballpark home run with two of them at Jacobs Field. I think I heard on the radio the only other current ballparks he hasn’t hit home runs in are RFK Stadium & New Busch. Unless it ends up being Rangers/Nats in the world series this year, he’s not getting one at RFK. :) Sosa also needs four more multi home run games to pass Babe Ruth for that record. Course, Barry Bonds is on that list too, one above Sosa at the moment.
We head to Toronto, where we’ll probably win one. Maybe. Sigh. At least it was nice seeing this image on ESPN’s site. That was fun. :) 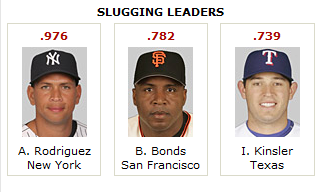